My name is Eoghan Brennan, I grew up in a townland not far from Portrunny called Clooncraff,

often referred to as ‘the village’. I have fond memories of Portrunny from my childhood and my recollections are from the late 1980s to early 1990s.

During the summer months we would spend our days working on the farm or in the bog rearing the turf. Sunday evenings were always a treat which meant a weekly visit to Portrunny. Back then Portrunny was a busy place at the weekends particularly if the weather was fine. You were always sure of a mineral and an ice cream.

Portrunny was a paradise for children at the time. There was a swing, a massive slide, big pipes painted different colours and lovely golden sand – in a way Portrunny was our local beach! Back then, there was no social media or internet, children spend more time outdoors and played together. 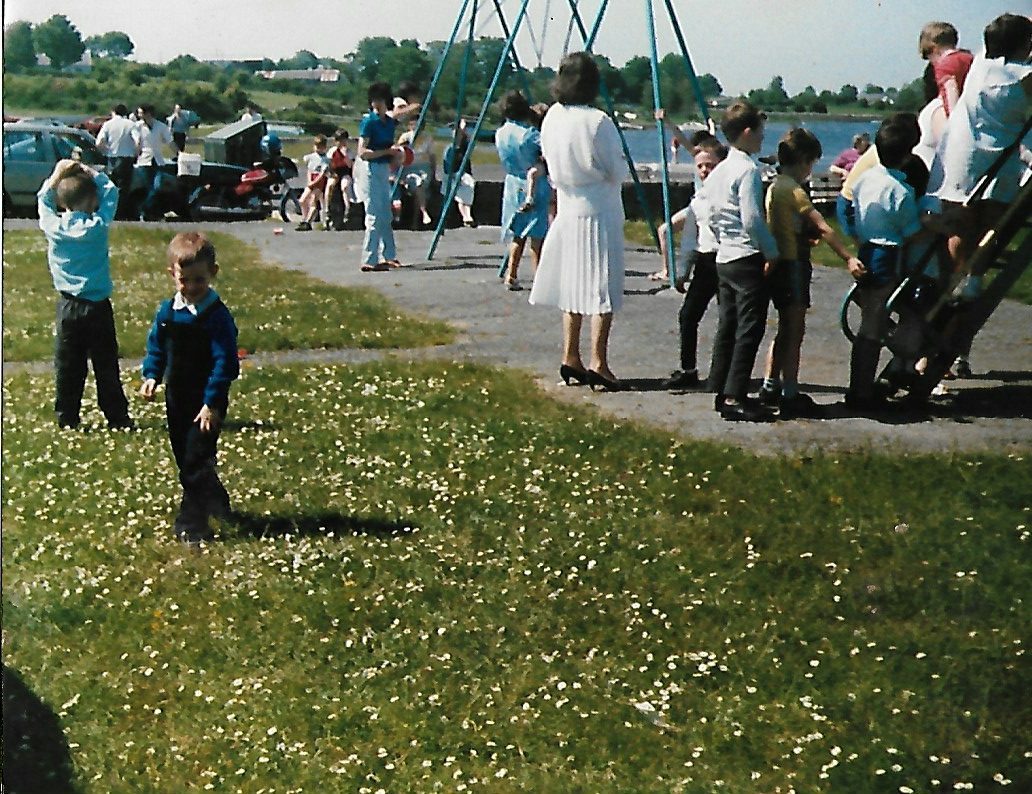 The slide in Portrunny was a big attraction and very popular with youngsters. You were always sure to meet your school friends in Portrunny at the weekends.

I went to school in Kilteevan and at the time it was a custom for Cannon Hanley and Sister Celia to bring the children to Portrunny for a picnic after they had made their first communion and before the summer holidays. This was an occasion the children always looked forward too. Cannon Hanley and Sister Celia were great people and I always remember our picnic in Portrunny and the fun on the swings and the slide. 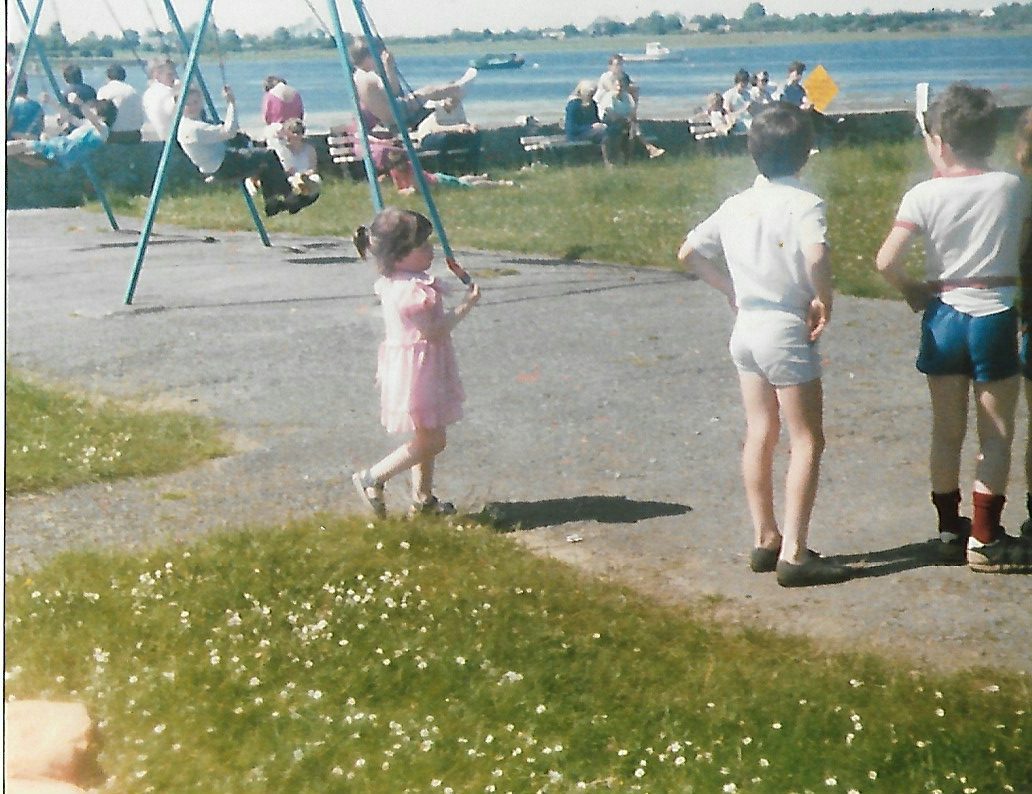 The marina in Portrunny was a hype of activity during the summer months, to us as children the boats and cruisers were massive. At the time the River Shannon attracted many German visitors and Portrunny was always very popular for them. This may have been down to the Shannon View Lounge more commonly known as Macs – this was a great place for children and adults. Macs was a big pub, it had the main bar and a lounge separated by a partition. There was a pool table and a game machine in the lounge which meant if the weather was poor there was no need to cancel our weekly visit to Portrunny. Macs also had a shop and HB ice cream freezer which was never a disappointment.

At one point a German took over Macs, we knew him as Klouse – he was a hit with the locals. Some Sunday evenings there would be a band playing in Macs. I can recall Klouse dancing away with the locals and his shirt out with a pint in his hand. He was some character! 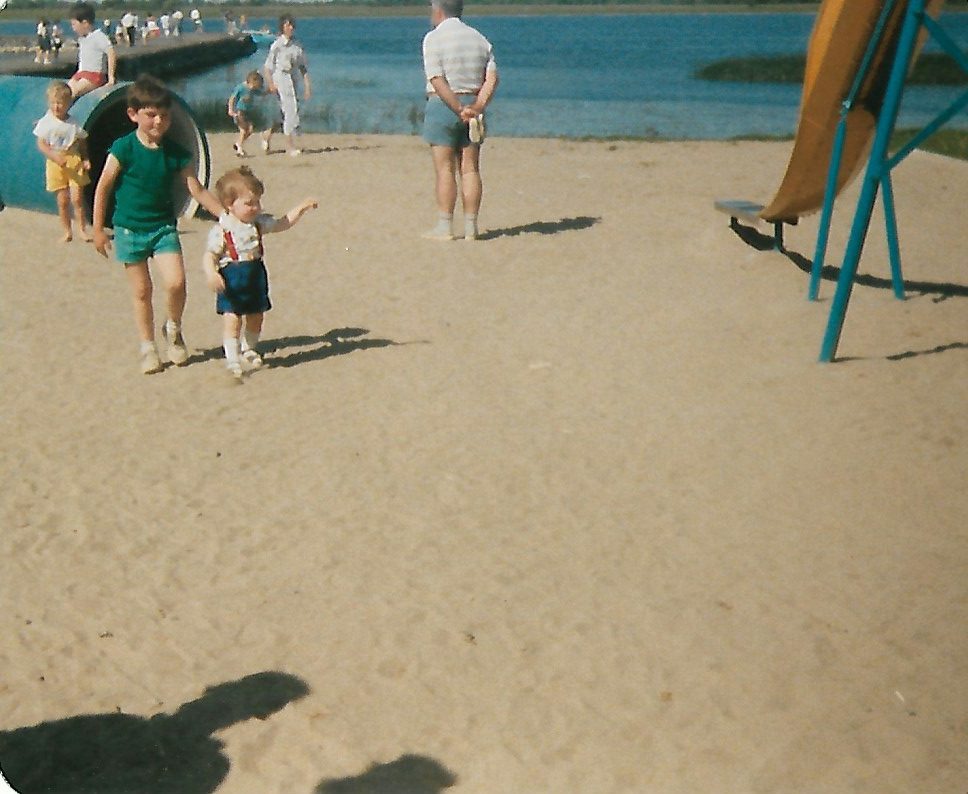 Macs had a timber fence leading from the public road to the front door. The handrail of the fence was a length of a tree without the branches! I have memories of being able to run around the front lawn and under the wooden handrail bearing in mind it was about four foot high!

One evening I got a big shock, as I ran under the handrail I fell to the ground. I had torn the top of my head and the blood was flowing down my face. There had been a rough knot in the wooden handrail and I think I must have grown an inch that week! Needless to say, that finished me being able to run underneath the handrail. I remember the fence so well and never forgot my fall. Needless to say I never told the parents!

I recall sunny Sunday evenings at Portrunny when tug-of-war was very popular with the local men during the Summer period. The green area directly across from Macs beside the shore line was used to pull the tug-of-war. This game was taken very serious with several arguments between rivals which were nothing more than friendly banter!

Nowadays my visits to Portrunny are mainly to walk along the shoreline admiring the wonderful views and scenery we have – where else would you get it such a beautiful location!