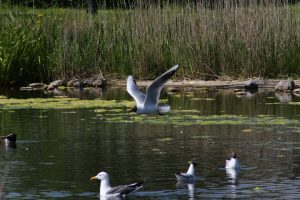 PORTRUNNY WILDLIFE
Portrunny is situated in the heart of Ireland on the western shore of Lough Ree in County Roscommon. The area is home to a host of wonderful and interesting wildlife. Many species of birds, butterflies, wildflowers, trees, animals and insects can be observed easily in the countryside around Portrunny. Interesting wildlife habitats in the area include wild hedgerow, meadow, bog, wet meadow, and open water.
Each season brings its own particular flora and fauna species to Portrunny. Some species are very common in Ireland and a few not so common. In spring and summer wildflowers are in abundance, while in winter ducks, swans and waders arrive from distance lands to feed and shelter in the calm waters of Portrunny. 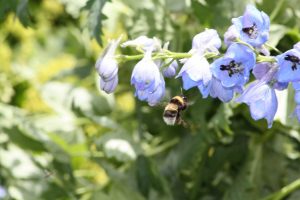 BIO-DIVERSITY is short for “Biological Diversity”. It refers to the variety of life on earth and includes all plant life and animals, and the habitats of which they are part. It varies from the smallest micro-organism on earth to the largest animal. Biodiversity is important because without it the world would not exist. 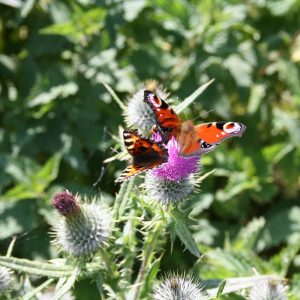 The wealth of wild flowers in spring and summer at Portrunny and Lough Ree attracts a variety of butterfly species. The orange tip butterfly is one of the first to appear in April each year. It lays eggs on its food plant the lady’s smock. Later in summer other species emerge including speckled wood, meadow brown and green-veined white. In Ireland the brimstone butterfly is mainly found in limestone areas, where the native buckthorn tree occurs.The brimstone emerges in springtime from winter hibernation and lays eggs on the leaves of the buckthorn tree. A new generation of the brimstone butterfly emerges in the late summer and hibernate during the winter, and lay eggs the following spring.

TREES and SHRUBS
Many species of trees and shrubs grow in the wild hedgerows around the Portrunny area. Ash, blackthorn and hazel are the most common tree species in the area. In early spring the golden-yellow flowers of the furze bush brighten up the whole countryside. 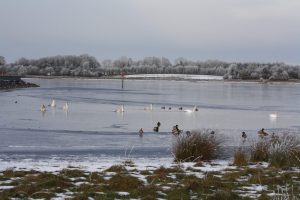 WILDLIFE
The area is home to several species of animals and insects. The fox, hedgehog and rabbit are common Irish animals found in the Portrunny area. In summer the frog can be seen in wettish areas. Summer is also the time to see many interesting insect species including dragonfly, damselfly and hoverfly. The grasshopper can be regularly seen in fields, along grassy roadsides and sometimes in boggy places.

WILD PLANTS
Many common wild plants can be found growing in the environs of Portrunny. During a typical walk around the local countryside it is possible to identify over one hundred different plants species. The list of wild plants could include wildflowers, ferns, grasses and sedges, all growing in great abundance in the area. In summer many colourful wildflower species decorate the countryside and attract a multitude of insects including bees and several colourful butterfly species. 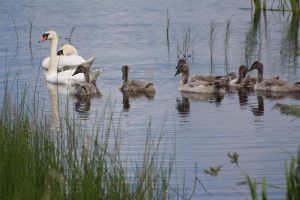 Coot and the moorhen are resident birds at Port runny throughout the year. In autumn and winter Portrunny and Lough Ree is a gathering place for wildfowl that arrive on the lake to spend the winter feeding. Duck species observed regularly include mallard,
tufted duck, teal, widgeon. The mute swan is resident in Ireland and Portrunny through-out the year, and is distinguished by an orange-coloured bill. Sometimes in winter visiting whooper swans arrive to join the resident mute swans. The Whooper has a yellow and black bill.

In spring the native mute swan nest close to the lake shore while any migrant whooper swans depart for their northern breeding grounds in Iceland. Regularly flocks of curlew and lapwing also spend the winter in the Portrunny area. The Blackbird, Robin and Song Thrush sing melodiously in spring and summer, and occasionally on a winters evening.
Rare plants of Lough Ree

Lough Ree and the environs of Portrunny is home to a few interesting and rare native Irish wild plants. On Lough Ree the Marsh Pea grows in wet places and marshes close to the lake. It is a very rare plant in Ireland but it can be found in several places on Lough Ree. The Common Skullcap is a wildflower of lake shores and wet areas. It grows well on Lough Ree in wettish places close to the lake.

Buckthorn and Alder-buckthorn are both species of native Irish trees. These shrub-like tree species are rare in Ireland but both grow in a few places near Portrunny and Lough Ree. The Water Germander is extremely rare in Ireland. It grows along the shores of Lough Ree and Portrunny. Lough Ree is the main centre in Ireland for this delicate wildflower. Lookout for this wildflower on the lake shore in summer and autumn between the high water mark and low water mark.

The Arrowhead is a water plant of slow moving waters and sheltered lakes. It is rare in Ireland and grows mainly in the midlands and Lough Ree. It is easily distinguished by the floating arrow-shaped leaves.