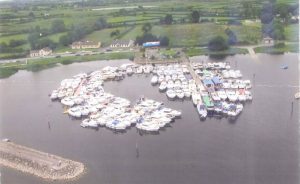 Portrunny, formerly known as “Cruit Bay” is located on the western shore of Lough Ree in Co Roscommon. Standing at the harbour, if you look southward, following the shoreline, you are looking at Cruit Point, and turning to face the north – east, you will see Rinanny Point. These two areas of land protruding into the lough create the beautiful naturally occurring Portrunny Bay, with its calm sheltered waters. On the north side of Rinanny Point is the Hind River which divides the areas of Ballymurray and Kilteevan. Inchcleraun (Quaker) Island is located approximately one mile east of Cruit Point. The water levels in the bay ranges from 60cm to an average depth of 6m, it is very suitable for recreational boats and cruisers. The seasonal changes in water level are managed by means of locks further along the river. On many occasions, the bay has frozen over entirely. 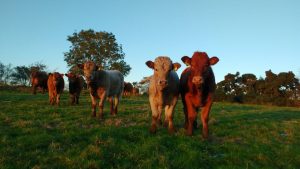 The landscape around Portrunny bay has been shaped not only by the waters of the lough, but also by centuries of agriculture which remains the main industry in the locality. Often, sheep from local farms are turned out to graze the shoreline. Set on low lying agricultural land, the scenery around Portrunny is characterised by mature trees, hedgerows and traditional stone walls. The blotchy white appearance of the stone in the walls is an indication of the rich limestone content of the local rock in the Portrunny area. In the past, lime kilns would have been a common sight here. Areas along the shoreline, known as “the Shannon Callows” are designated Special Areas of Conservation (SAC’s).

Portrunny comes from the Irish Port Air Chinnich, referring to a person entrusted with the care of a monastery and its lands. This suggests that a settlement here may have been significant during the early Christian medieval period, when it is known that monastic communities lived in the locality.

The islands of Lough Ree were often plundered and raided, particularly Inchcleraun Island, where St. Diarmaid founded a monastery around 540A.D. With its quiet water, it is possible that St. Diarmaid would have travelled from Inchcleraun Island by log boat or a “cot” boat to Portrunny Harbour, on his visits to the mainland. One of these cot boats was found in1980 in the neighbouring Galey Bay.

To the west of the harbour, Portrunny Church and Graveyard are located on an elevated site overlooking Portrunny Bay. As you walk up An Bothár Mór towards the church and graveyard, St Diarmaid’s Holy Well can be found on the right-hand side. Tradition has it that there is a cure for sore eyes in this well. 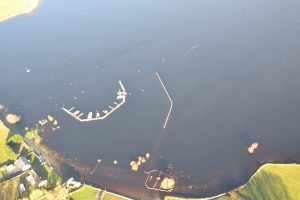 In the 1970s, the increasing popularity of Portrunny as a water amenity area encouraged the local authority to construct the first stone jetty for boats and cruisers to moor overnight in the harbour. Prior to this, local people would have anchored their small boats in the shallows of the shoreline. In 2006, Waterways Ireland invested in a new marina with floating jetty to include 24 berthing spaces as well as upgrading the existing breakwater and sanitary facilities for visiting cruisers and boats.

In the winter of 2015/16, water levels on the Shannon rose to such an extent that much of the shoreline of Portrunny Bay was flooded, including the children’s playground, and the road. This impacted not only on the locals who found it difficult to travel to and from their homes, but on recreational visitors to the area. As a result of this, in 2016 Roscommon County Council, recognising the high usage of Portrunny Bay, carried out flood elevation works, including raising some of the road, and resurfacing as well as installing pavements and lighting.