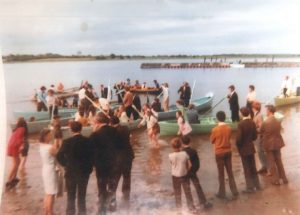 For many generations, both locals and visitors have used Portrunny Bay as a recreational area. It is a place that has a tradition of bringing people together through their mutual love of nature and water based activities. Throughout the 1900’s, an annual regatta was organised at Portrunny, with such activities as boat racing, fishing, rowing, clay pigeon shooting, and tug-of-war, to name but a few.

This regatta was known as the “democratic regatta” indicating that the Portrunny event welcomed anyone who wished to take part, as opposed to the neighbouring regatta in Galey Bay which was open only to gentry and aristocracy. 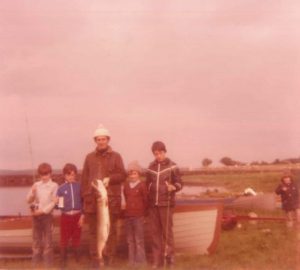 A local newspaper article referred to the Pike fishing competition of the regatta in 1980 stating;

“Eighty lines took part in the Pike Fishing competition at Portrun on Sunday, The competition was sponsored by local publican Vincent McDermott and he presented the P.J McDermott Memorial Trophy and £100 to Michael Casserly of Athlone. Michael caught a pike 25lbs. 5 ounces. Second prize (£20) was won by Pat Farrell, Newtowncashel, Longford with a Pike 18lbs. 3 ounces and third prize (£10) went to Pat Tobin, Athlone with a fish 18lbs. 1 ounce. Tommy Connor, Portrun and P.Dolan, Athlone did a splendid job at the weigh-in. The competition was very successful and brought a large crowd to Portrun. Vincent McDermott thanked everyone who took part.”