Undeterred by the wet weather, crowds gathered today Saturday 13th October 2018 at Portrunny for the launch of the much anticipated Portrunny Heritage Trail. The trail was launched by Deputy Denis Naughton, and also in attendance were Cathaoirleach Ivan Connaughton and Councillors Orla Leydon and Kathleen Shanagher.

Portrun Development Association established the Portrunny Heritage Trail to mark the local heritage sites, improving the experience of visitors to the area by showing the heritage through interpretative signage. It takes the user to some of the local medieval sites including Galey Bay and Castle, Inchcleraun Island, St. Diarmaid’s Holy Well and Portrunny Church & Graveyard to name a few.

Speaking at today’s Launch, PRO of Portrun Development Association Ms Cora Mugan mentioned the significance of each of the heritage sites along the trail and informed the crowd of the reason behind the trail – to ensure that important local heritage was not forgotten by the next generation. Ms Mugan spoke of the work that went into establishing the trail from the initial idea more than a year ago, gathering information from local people, archives and libraries and putting it all together into the 9 signs that can be visited by users of the trail today.

Ms Mugan was also very complementary of the assistance of Hazel Ryan, Sr. Kathleen Glennon, Michael Lough and John Early (Cork) who provided great assistance and support towards the project. The signage suppliers were also highlighted for their patience and attention to detail in designing each of the tasteful signs. Highway Safety Developments were represented in attendance by Mr Jim Dumphy and a special thank you was sent to Deirdre in the design office at Highway.

Chairperson of the Association, Mr Gerry Hanlon thanked everyone for coming and gave a special thanks to the members of the committee that worked together to develop the trail. He referred to the hard work and dedication of all members of the committee, not just in developing the heritage trail, but in all of the projects undertaken and the general keeping of the area.
Mr Hanlon went on to thank the various funders of the trail including, Town & Villages Renewal Scheme, Roscommon Co Council, Waterways Ireland and Inland Fisheries Ireland. John Mockler Municipal District Coordinator and the outdoor staff of Roscommon Co Council were given a special mention for their assistance in erecting the trail signage.

A special presentation was made to Mr Michael Spellman representing Kilteevan Community Development Group to mark the cooperation of the two neighbouring communities. Users of the trail can link onto the adjoining Kilteevan Heritage trail at two sites where the community’s border – Shannon View School and Cloonsellan Abbey and Townland. Ms Mugan made special reference to the successful collaboration of both communities.

Before cutting the ribbon to officially launch the Heritage Trail, Deputy Denis Naughton addressed the crowd. As a regular user of the amenity at Portrunny and representing all visitors to the area he praised the hard work and dedication of the committee of Portrun Development Association and expressed gratitude for their part in providing the heritage trail as an educational tool. Deptuy Naughton went on to point out that although this is not the first project to be completed by the committee, it is part of the beginning of many exciting projects to be carried out here. In effect he told the crowd to “watch this space” and anticipates that Portrunny will continue to thrive and develop further.

Committee member Mr Ciaran Heneghan took to the stage to wrap up the formalities before the crowd was treated to a buffet lunch courtesy of committee members. Mr Heneghan expressed gratitude again on behalf of the committee to everyone attended. He reflected on how the dedication of members had led to the launch of the trail amongst other projects including the imminent release of the feasibility study in relation to Portrunny Amenity and Recreational Centre (PARC).

PARC is envisaged to be a multi-purpose building which would meet the social needs of a thriving tourism hub at Portrunny. Mr Heneghan concluded by reminding the crowd that such projects do not happen without dedicated people and encouraged anyone who would like to get involved to do so, stating “Everyone is welcome here at Portrunny!” 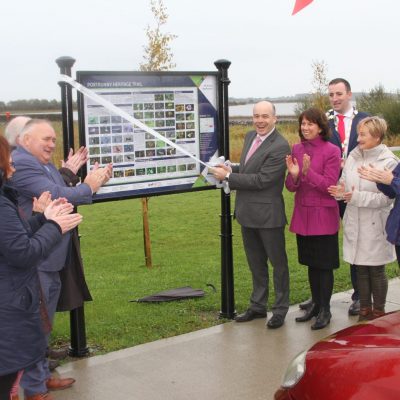 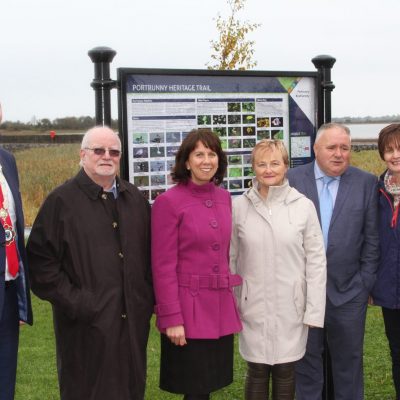 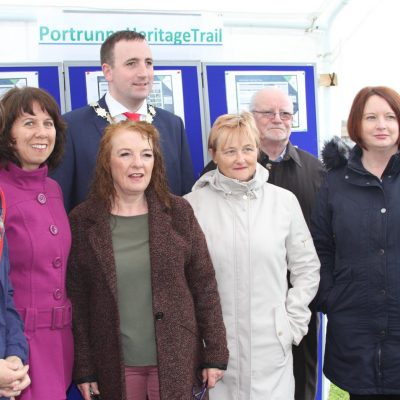 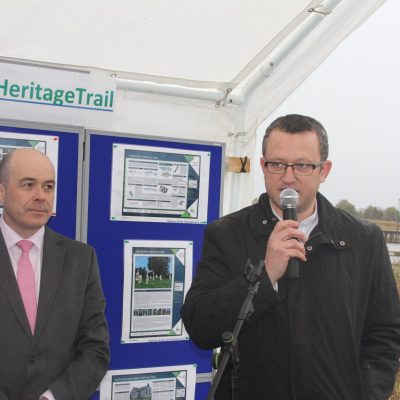 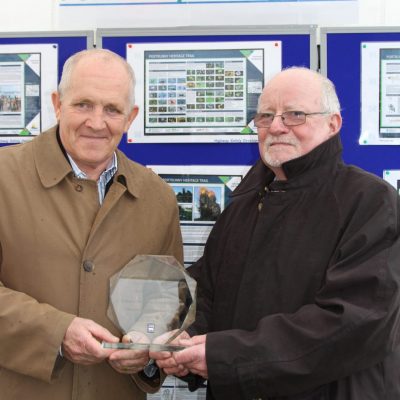